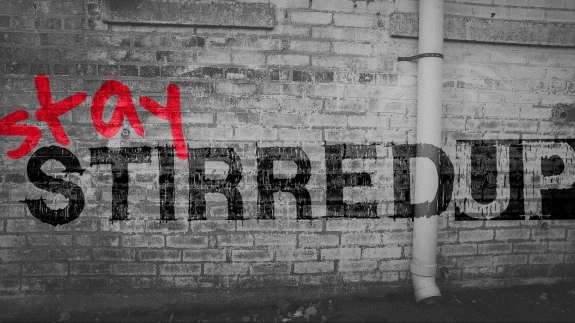 The journey of Stay Stirred Up founder, Sean Statz, is not your conventional success story. However, in reality, success stories hardly are conventional in a sense. Various obstacles, roadblocks, and setbacks get thrown into the mix, but in the words of Rocky Balboa “It’s not about how hard you hit. It’s about how hard you can get hit and keep moving forward.”. What started out as a passion for music, lead to a dark path but came out the other side a better person with a whole new perspective in life with a new, profound purpose.

Sean grew up in Bristol, TN in a good home life. He established a passion for hip-hop music early in his youth, around the age of 12, that never died down and had ambitions to work in the music industry in any capacity. There was no questioning his drive but what he didn’t have was direction. Most who knew him assumed he would take the “conventional” path to success by going to college right after high school and then on to pursue his dream. Unfortunately for him, at that time, there was no outlet to pursue his ambition in the area nor did he have the means to make that happen. That is with the exception of the very same people that lead him to prison. Through his hip-hop he got mixed in with the wrong crowd and, long story short, he got caught in what became the largest cocaine ring in Tri-Cities history and was subsequently sentenced to 10 years in prison. That is a situation in which many would find a hard time to keep moving forward after taking such a big hit in life but he refused to let that define him.

His passion for music never died while he was incarcerated. He took advantage of what little resources he had access to to learn about audio engineering through textbooks and even was able to get his hands on a keyboard so he could continue to craft his music. After he was released from prison, he had become so proficient as an audio engineer that, despite his record, he was able to secure a job as an audio engineer at one of the most prestigious marketing companies in the Tri-Cities. Sean finally had a career that allowed him to display his talents.

It wasn’t long after that he felt compelled to do more with his life and give back to the youth in the area. He wanted to give them the opportunities he never had growing up. He wanted to provide them with “opportunities to discover, cultivate and showcase their talents and passions” by providing them with character development and resources. That’s what Stay Stirred Up is all about. He founded this non-profit after it was just a mere concept this past April and has already reached 501 (c)(3) status and with the help of those that helped launch his career after incarceration. Sean Statz understood better than anyone that no matter your circumstances there is always a way out and that is why he has worked tirelessly since this program’s inception, to spread his new-found purpose to the Tri-Cities through summer events and speaking engagements at multiple schools around the area. He is not shy about sharing his story with anyone either. It was his story that got Stay Stirred Up to where it is today and it’s a story that has especially resonated with the youth he’s spoken to and those with family members who are currently incarcerated. In fact, he had to deal with his child being born while he was in prison and that became an important aspect of this program. Seeing how it can affect a child firsthand, he wants to prepare both the student and the incarcerated parent, or guardian, upon their release by bridging the relationship gap that is there.

They have recently adopted a social media campaign that is big part of what they’re doing in finding local, talented youth to work with on their skillset. The concept is to help find youth with musical talents, as well as other talents, by having them upload their videos on social media of their skills and putting “#staystirredup” in the post. Stay Stirred Up will pick some of those students each month and then shoot professional videos to encourage them while showcasing what they can do. While Sean himself will be able to coach those with musical ambitions, he is also bringing in volunteers to help with those of other aspirations, such as art and creative writing. Some of the videos through Stay Stirred Up have reached the eyes and ears of tens of thousands so far and it’s only the beginning. As mentioned before, no matter your circumstances, there is always a way out and that is really what Sean wants to hit home with students. His hometown of Bristol, VA has fallen upon financial struggles and one of their elementary schools, in fact, is the poorest school in the state. Many children in the Tri-Cities have seen their parents being incarcerated and at a rate never seen before, in large part because of the use of drugs in the area. He isn’t going to let that be an excuse, though, for the youth to follow in the same footsteps he once took as a high school student because he’s giving them a better choice and a better chance.

It’s easy to see the genuineness in his story and how it can be applied to provide aspiring artists in a region, with not many resources, a way to help cultivate those passions. He’s not alone either. This movement is making its way across the Tri-Cities and is motivating people to help fix this problem. While he wants the base of operations to be in Bristol, he eventually wants to expand to Kingsport and possibly Johnson City as well. But first, they are in need of a building so they can meet with students in a safe environment and help fine-tune their crafts. Also, this will serve as a location to shoot professional videos to showcase each of their unique talents to the world. Finances are what is keeping them from attaining a building today but Sean doesn’t believe it will be long until he can get the resources to make it happen. With your help, we can spread his vision to see that the children in the Tri-Cities find a better way to express themselves and their talents, no matter their circumstances.

To learn more about Stay Stirred Up or to help their cause, visit their Facebook page or their website.