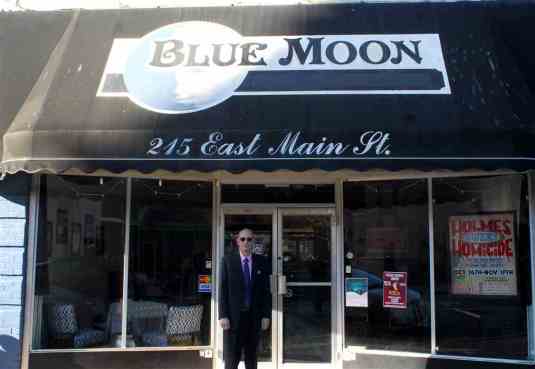 Original article by JESSICA FULLER from the Johnson City Press

Blue Moon’s building is changing hands, but that doesn’t mean the theatre’s regular programming is slowing down any time soon.

In fact, the new owners have plans to bring more events to the building.

Blue Moon Theatre Company will be celebrating 10 years of business this week – Ed Breese debuted his first play in 2008. Since then, the theatre has hosted a myriad of different plays, murder mysteries and even some shows Breese penned himself.

New owners John Mueller and Ken Jacobson will close on the deal later this month and said that productions at the theatre will continue as normal, but beginning in January, the theater will be hosting additional events along with the plays throughout the year.

Beginning Jan. 9, Mueller’s own company, Tree Streets Entertainment, will be hosting a Drag Queen Bingo Night every 2nd and 4th Wednesday of the month from 7:30-9:30.

While patrons will play bingo and win small prizes, Mueller said the event will be more about the entertainment from the drag queens and will showcase queens locally and from around the region.

The new owners also have their eyes set on a comic night in the future, plus a college night to offer dancing and a Margaritaville theme is also on the horizon.

Mueller said he and his business partner will also be working to preserve the theatre’s facade and interior and keep the theater up and running for years to come.

“It’s going to go way beyond us, we’re going to endow and trust it to make sure it stays an actual theater,” he said.

The theatre went on a hiatus in 2014 while Breese battled a serious illness. It opened back in the fall of 2017 with an original play, “Things Stranger,” and has continued to offer shows. The next show, “Every Christmas Story Ever Told! (and then some)” opens Dec. 1.

Breese said that as director, he will continue to bring unique plays and shows to the community.

“We’re just very happy to have been there for the past 10 years,” Breese said, adding, “Now with the building being purchased, it’s just like ‘what is the next chapter?’”